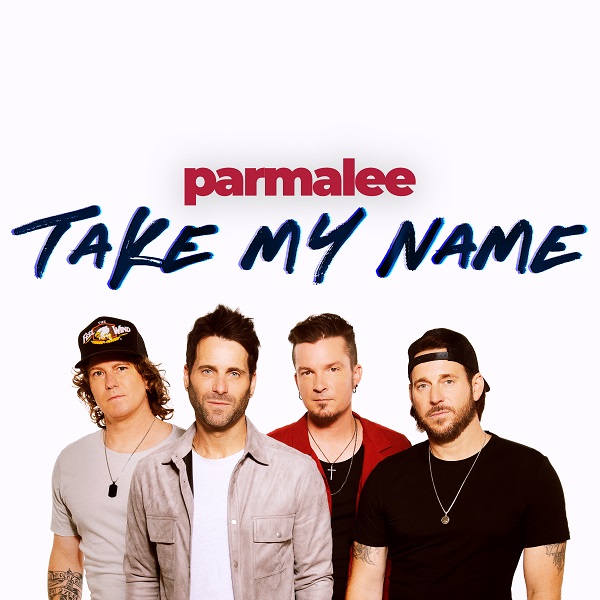 Platinum-selling band Parmalee today announces their smash hit “Take My Name” has earned its second week at No. 1 on the Billboard Country radio chart and its first week at No. 1 on the Mediabase chart. The song earned the No. 1 spot in audience on Billboard, dethroning its last week position at the top—the song now holds both the No. 1 and No. 2 spots in audience for 2022. As the song continues to grow, the band will perform the second consecutive No. 1 single on NBC’s TODAY on Tuesday, June 28.

Garnering more than 135 million global on-demand streams and currently inside the Top 10 in Country single sales, “Take My Name” is the follow up to the multinational No. 1 smash, “Just the Way” with Blanco Brown—which was the most played song on iHeart Country in 2021. “Take My Name” was written by front man Matt Thomas, along with Ashley Gorley (who has garnered over 50 No.1 songs at Country radio), Track45 member Ben Johnson, and the song’s producer David Fanning.

“We were blown away with the success of ‘Just the Way,’ to see ‘Take My Name’ surpass that is just wild,” said Matt Thomas of Parmalee. “We wrote For You as a love letter to our fans and seeing how folks embraced us and especially this song—incorporating it into their major life moments, feels like our letter was answered, we’re over the moon and beyond thankful.”

“Take My Name,” which is “essentially a musical marriage proposal” (The Boot), became an early fan favorite after being teased on TikTok (before the song was even released). Fans went wild, clamoring to get their hands on the song to use as their wedding song. Always one to take care of their fans, Parmalee removed the catchy percussion to create a softer, piano-focused ““Take My Name (Wedding Version) for such occasions—and has even surprised a few couples, crashing their weddings to sing them the song.

The tune comes from their recently released album For You which was distributed via BBR Music Group/Stoney Creek Records. The 13-track project has garnered critical acclaim with American Songwriter praising it as “authentically real, genuinely inspired,” Sounds Like Nashville predicting it to be the “next big move in their musical journey” and Billboard saying “Parmalee finds itself in the enviable position of being able to tap into multiple audiences.” Produced by David Fanning, the album mixes a contemporary sound with classic ingredients and is filled with larger-than-life Pop hooks, southern storytelling, and the amplified attitude of Rock ‘n Roll. Primarily written by Parmalee lead singer Matt Thomas, For You draws from personal experiences to speak directly to the heart of their fans, honing in on that connection to make for their most harmonious project yet.