Latest Album FOR YOU Out Now 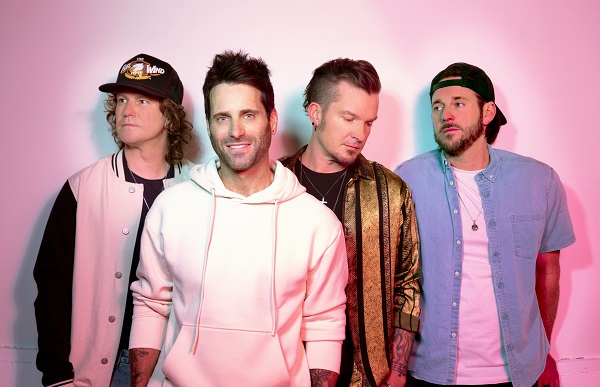 Platinum-selling band Parmalee impacts Country radio once again – their romantic ode “Take My Name” was delivered to stations yesterday (10/4), becoming the third most added tune with an impressive 33 adds upon impact. Already off to a strong start, the track spent four weeks on Spotify’s Viral 50-USA chart and was the No. 1 top-spinning song on Pandora’s New Country Station four out of the last five weeks, as well as No. 5 Top Thumbed. “Take My Name,” which is “essentially a musical marriage proposal” (The Boot), became an early fan favorite on TikTok and shows off their Country foundation with Pop elements. Backed by a catchy hook, the tune was written by frontman Matt Thomas, along with Ashley Gorley (who has garnered over 50 No.1 songs at Country radio), producer David Fanning, and Track45 member Ben Johnson. Adding to the excitement, the group will bring a swoon worthy performance of the single to The Kelly Clarkson Show, airing on October 18 on NBC.

Listen to “Take My Name” HERE.

The tune comes from their recently released album For You which was distributed via BBR Music Group/Stoney Creek Records. The 13-track project has garnered critical acclaim with American Songwriter praising it as “authentically real, genuinely inspired,” Sounds Like Nashville predicting it to be the “next big move in their musical journey” and Billboard saying “Parmalee finds itself in the enviable position of being able to tap into multiple audiences.”

For You is the latest chapter in the southern hitmakers’ journey in expanding the boundaries of Country music. Produced by David Fanning, the album mixes a contemporary sound with classic ingredients and is filled with larger-than-life Pop hooks, southern storytelling, and the amplified attitude of Rock ‘n Roll. Primarily written by Parmalee lead singer Matt Thomas, For You draws from personal experiences to speak directly to the heart of their fans, honing in on that connection to make for their most harmonious project yet.

Laying the foundation for the album is the multi-national, Platinum-certified smash of a collaboration with TrailerTrap creator, Blanco Brown, “Just the Way.” Having topped the charts in the US and Canada this year, the hit has garnered more than 300 million on-demand streams. The song mixes Parmalee’s sharp songwriting and vocal harmonies with a modern message of self-love and individuality and found its way into the Top 20 on Hot AC radio. The feel-good hit also spurred a Pop version of the tune co-produced by Andrew Goldstein that features Pop/Hip Hop maverick Bryce Vine, in addition to an acoustic version that makes for an even sweeter serenade.