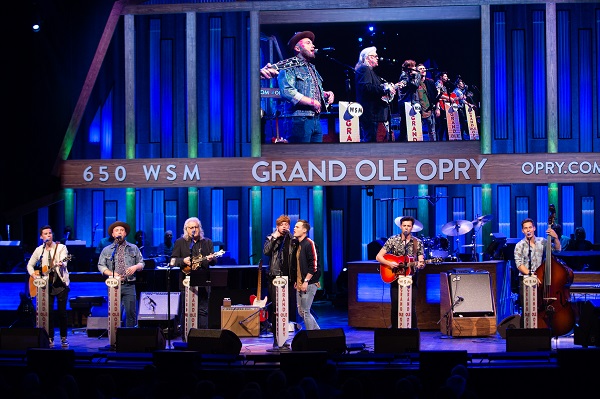 On June 1, emerging Nashville-based band KING CALAWAY marked their second appearance on the storied Grand Ole Opry stage with a one of a kind, magical moment that came together mere hours before the show itself – a stunning, collaborative performance of The Eagles’ “Seven Bridges Road” with Country Music Hall of Fame member RICKY SKAGGS. The song performance premiered on The Bobby Bones Show this morning and is now available to stream across all platforms – listen here. Additionally, the official video of the performance can be watched here.

Proving that lightning often strikes when real musicians join their talents together, country legend Ricky Skaggs and six member King Calaway held an impromptu jam session just hours before the show where the magic of the moment became clear to all involved. The members of King Calaway – who are all vocalists & instrumentalists — joined Skaggs in the Eagles’ classic “Seven Bridges Road.”  With Skaggs on the mandolin; Caleb Miller and Simon Dumas on guitar; Austin Luther on stand-up bass; Chris Deaton, Jordan Harvey, and Chad Michael Jervis joining on vocals and no real rehearsal time logged, they delivered an unparalleled bluegrass-infused performance of the song, with King Calaway’s signature six-part harmonies working perfectly in tandem with Skaggs’ storied vocals.

Of the experience, guitarist Caleb Miller says, “Having the honor of playing with Ricky Skaggs at the Opry was a moment that made all of us stop and reflect on what we had just experienced. Ricky has been a huge influence on all of us. He is a legend in Country music. Being able to share the stage with such an icon, while playing such an iconic song, was nothing short of humbling. This was such a milestone in all of our careers and a moment we won’t ever forget.”

The weeks following their Opry performance with Skaggs were filled with even more achievements for the band – on June 6, they performed at CMA Fest for the first time and on June 10, they made their national television performance debut on Jimmy Kimmel Live! with performances of their hit single, “World For Two” and the foot-stomping anthem, “Rivers.” Both songs are off their self-titled debut EP, released in January. Most recently, they opened for Rascal Flatts at Ascend Amphitheater on July 6 in Nashville, TN.

The EP’s first single “World For Two” was the most added song at country radio in its first week at US radio, has been in the Top 5 for consumption per spin and streams per spin for the past seven weeks and continues to grow rapidly across streaming platforms.