DEBUT SINGLE “TRIPPIN’ ON US” AVAILABLE NOW AT ITUNES 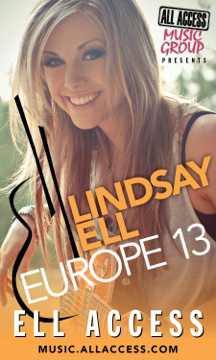 (NASHVILLE, TN) – All Access Music Group and Stoney Creek Records have partnered on a creative new platform to introduce country radio and fans to rising star Lindsay Ell as she journeys across Europe and the UK as part of The Band Perry’s “We Are Pioneers” World Tour.

Video blog ELL ACCESS will chronicle Ell’s daily adventures as she brings her unique approach to country music to fans in Sweden, Norway, England, France, the Netherlands, Ireland and more.

Beginning now through December 16th country radio programmers and fans can log onto http://www.ellaccess.com to witness the 24-year-old’s travel experiences and exclusive behind-the-scenes footage during Ell’s whirlwind tour of a lifetime.

Episode One of ELL ACCESS kicks off the series as Ell describes oversleeping on the morning she’s supposed to board a plane for her very first trip across the pond. The video blog originates from the passenger seat as the country chanteuse speeds down I-40 on her way to the Nashville International Airport. Episode Two showcases Ell’s layover at London’s Heathrow Airport while Episode Three gives radio and fans a special glimpse of Ell’s very first tour performance from Gothenburg, Sweden.

Ell’s debut single, “Trippin’ On Us,” impacts country radio on December 16 and is available now at iTunes: http://smarturl.it/TrippinOnUs-iTunes

ABOUT LINDSAY ELL:
Stoney Creek Records artist Lindsay Ell is a triple threat: accomplished musician, unique vocalist and songwriter. The 24-year-old Calgary native learned to play guitar while traveling with her father to country-bluegrass camps as a young girl. Ell honed her craft as a musical stylist and songwriter after being discovered by BTO and The Guess Who’s Randy Bachman (“American Woman” / “Taking Care of Business”) who discovered her at the age of 13. The multi-instrumentalist was soon opening for the likes of Buddy Guy and Keith Urban. This Winter, Ell will travel the globe as the opening act for The Band Perry’s “We Are Pioneers” World Tour encompassing 50 dates throughout Europe and North America now through March 2014. Ell’s debut single, “Trippin’ On Us,” impacts country radio on December 16 and is available at iTunes now.