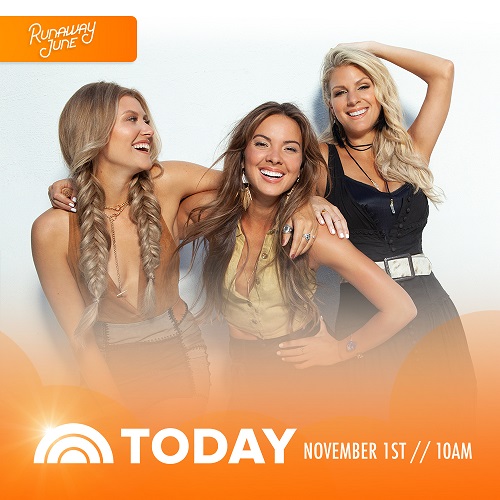 On the heels of a show-stopping CMT Artists of the Year performance alongside 2019 tour-mates Carrie Underwood and Maddie & Tae offering a “stellar medley” (Washington Post), fast-rising Wheelhouse Record’s trio Runaway June will continue the whirlwind media blitz appearing on NBC’s TODAY next Thursday, November 1. Making their morning television debut, the buzzed-about group heralded as “a band that’s well on its way to country music superstardom” (People.com) is slated to perform current single “Buy My Own Drinks.”

“Buy My Own Drinks” is the lead single from the red-hot group’s self-titled debut EP (9/7) and is written by the trio with celebrated songsmiths Hillary Lindsey and Josh Kear. The song has been lauded a “runaway hit,” (Music Row Magazine) and is making its ascent at Country radio.

Runaway June continues to take Country music by storm as they prepare to support seven-time Grammy winner and Pollstar’s three-time top female country touring artist Carrie Underwood as she launches a new arena tour, The Cry Pretty Tour 360, in Spring 2019.  Sponsored by CALIA, the new tour will kick off on May 1 in Greensboro, NC, and will play 55 arenas across the U.S. and Canada and be promoted by AEG Presents.

Tickets for the concerts are on sale now.