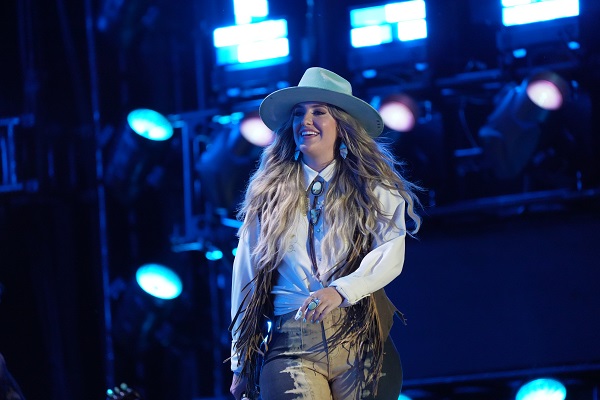 Amidst a whirlwind CMA Fest, complete with a slew of appearances and six performances across three days (including Nissan Stadium), it was announced that ACM New Female Artist of the Year and iHeartRadio Music Awards’ Best New Country Artist, Lainey Wilson, will join the cast of Paramount Network’s mega hit show Yellowstone as a recurring guest star in its fifth season. The fast-rising Bell Bottom Country star will take on the role of Abby, a character Taylor Sheridan (co-creator of the show) crafted specifically for Wilson.

The “absolute star in the making” (Billboard) will play a musician on the show and perform new original music written and recorded by Wilson. This isn’t the first time her music has appeared on the show, her music has been featured three times over the course of the series and she was selected to do an exclusive performance in partnership with the show and Fritos during the commercial breaks during the season four finale.

“I’m such a fan of Yellowstone and Taylor (Sheridan)—this is an absolute dream, a dream I didn’t even know was on the menu. Taylor, Andrea and the entire team over there have been so good to me over the years and for Taylor to create a character aligned with who I am as an artist is just wild,” said Lainey Wilson. “I’m so grateful for the opportunity to not only step outside my comfort zone and explore acting but to share more of my music on such an incredible platform, especially one that fans eagerly look to for music discovery.”

Lainey has been drastically increasing her audience as of late, in the past month alone Lainey has released her new (Top 40 and climbing) single, “Heart Like A Truck” and its accompanying music video, performed the “as sturdy as its title” (Rolling Stone) new song on NBC’s TODAY and on The Tonight Show Starring Jimmy Fallon, traveled across the country performing with Hank Williams Jr. and HARDY and Morgan Wallen on the Dangerous Tour. For her second CMA Fest as an artist, Lainey performed six sets in three days including the big stage at Nissan Stadium, Chevy Riverfront Stage, Spotify House, CMA Close Up Stage, SiriusXM’s The Highway Music Row Happy Hour and the longstanding Marty Stuart Late Night Jam, where she stood on the Ryman stage to sing Hank William’s “Lost Highway” while playing a 1939 Martin guitar once owned by Johnny Cash and Williams. Several of her CMA Fest moments made Billboard, American Songwriter and Morning Hangover’s lists of best CMA Fest moments.

Fans can catch Lainey on the Ain’t Always the Cowboy Tour with Jon Pardi and Hailey Whitters tour this summer as well as select dates with Morgan Wallen and Luke Combs. For more information about the “bona fide redneck warrior princess” (Saving Country Music), visit www.laineywilson.com