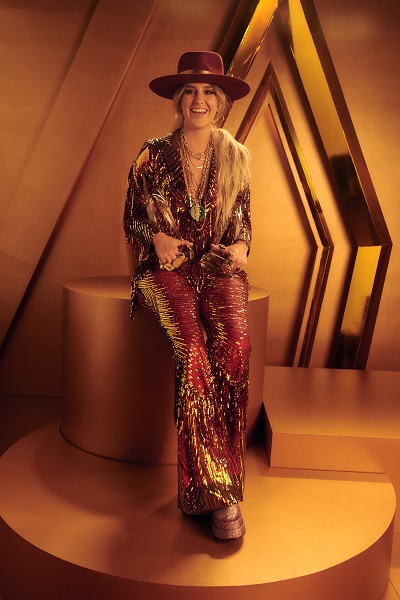 Last night, Lainey Wilson took home the highly coveted trophies for Female Vocalist of the Year and New Artist of the Year during her CMA Awards debut. Wilson, the most nominated artist of the night, is the first artist to win both awards in the same year since Carrie Underwood in 2006. Watch her emotional acceptance speeches here and here, and relive her performances here and here.

At the ceremony last night, Wilson performed her current radio collaboration “wait in the truck” with HARDY and “Chasin’ That Neon Rainbow” with Jon Pardi, Dierks Bently, and Carrie Underwood during Alan Jackson’s Lifetime Achievement Award tribute. Wilson also partnered with Crown Royal to honor active-duty military and veterans, and, during the telecast, presented their $50,000 donation to CreatiVets, an organization dedicated to empowering wounded veterans to heal through the arts and music.

Prior to the show, she walked the red carpet in a custom Laura Citron suit, Alexis Bittar and Mud Lowery jewelry, Sam Edelman shoes, and a Standard Hatworks hat.

The 56th Annual Country Music Association Awards aired live on Hulu. Fans can relive all the excitement of the ceremony on Hulu.