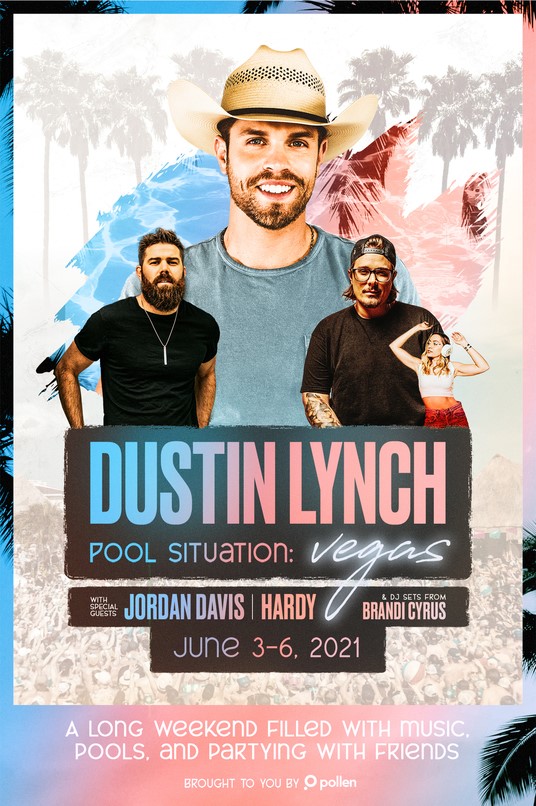 Broken Bow Records party-starter Dustin Lynch is taking over Sin City this week, throwing DUSTIN LYNCH POOL SITUATION: VEGAS on Thursday (6/3) through Sunday (6/6). VIP packages for the ultimate party of the summer are now SOLD OUT, but fans can still purchase an events-only Party Pass here.

With curated parties popping up all across the Las Vegas Strip and named after Lynch’s songs, DUSTIN LYNCH POOL SITUATION: VEGAS is an experience brought to fans by Pollen. On Thursday (6/3), Lynch will host the “Where It’s At” Welcome Party at Drai’s with a DJ set by Brandi Cyrus, before upping the ante Friday (6/4) with a “Cowboys and Angels” Pool Party at Encore Beach Club as Lynch headlines with additional performances by Jordan Davis and Cyrus. Lynch tees off as emcee of a Topgolf Competition Saturday (6/5), before returning to the stage for “The Last Lap” Closing Party at DAYLIGHT Beach Club at Mandalay Bay, where HARDY is also set to perform. Full DUSTIN LYNCH POOL SITUATION: VEGAS details can be found here.

Anticipated to include his latest red-hot collaborations on the setlist, Lynch is charging Country radio with “exciting and relatable” (MusicRow) “Thinking ‘Bout You (feat. MacKenzie Porter)” boasting a two-week recent reign as #1 most-added, plus serving up “Tequila On A Boat (feat. Chris Lane).” The “carefree summertime anthem” (ABC Audio) is “best paired with salt and lime,” praises American Songwriter, adding, “the buzzing track evokes the carefree buoyancy that can only be found floating on a lake.” And with Entertainment Tonight deeming it a “tipsy summer jam,” MusicRow urges, “Bob heads and smile.”