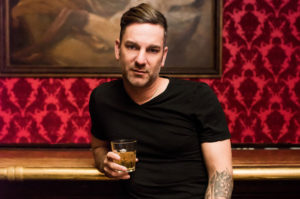 MUCH-LOVED TRADITION WILL BENEFIT FIGHT CRC IN THE BATTLE AGAINST COLORECTAL CANCER.

Nashville, Tenn. (March 26, 2018) – With Colorectal Cancer Awareness Month wrapping up at the end of March, BBR Music Group artist CRAIG CAMPBELL has revealed plans to continue fighting the devastating disease with his 6TH ANNUAL CELEBRITY CORNHOLE CHALLENGE.
Helping kick off the 2018 CMA Music Festival a few days early, this year’s event will take place at Nashville’s City Winery on June 5, with a star-studded benefit dinner to follow on June 6. All proceeds from the event will once again benefit FIGHT CRC (Fight Colorectal Cancer), a nonprofit organization working to increase awareness, education and research on colorectal cancer – the second-leading cause of cancer deaths among adults in the U.S.
Campbell has dedicated himself to the cause as one of FIGHT CRC’s national spokespersons, having lost his father to colorectal cancer when he was just 11 years old. His father was only 36. So far, the yearly events have contributed hundreds of thousands of dollars to FIGHT CRC, with last year’s event bringing in more than $180,000.
“To say I’m excited about this year’s celebrity cornhole challenge would be a huge understatement,” shared Campbell. “It’s hard to believe this is year six! We’re hoping to beat the $180,000 we raised last year, so we’re pulling out all the stops and will have a few returning celebrities and some rookies playing to help Fight CRC. Seeing all the fans come out in support, means the world to me!”
Celebrity guests for CRAIG CAMPBELL’S 6TH ANNUAL CELEBRITY CORNHOLE CHALLENGE will be announced soon, and fans who bid online will be selected to play against those stars – which in years past have included Lee Brice, Lindsay Ell, LOCASH, Jerrod Niemann, Thompson Square, Michael Ray, Charlie Worsham and more.
In related news, Campbell’s flirtatious new single, “See You Try,” is set to impact Country radio April 9. The pure-Country anthem follows the uplifting critical success of “Outskirts of Heaven,” as well as two acclaimed studio albums and unforgettable hits like “Family Man,” “Fish,” “Outta My Head” and the Top 10 radio smash, “Keep Them Kisses Comin’.” Campbell is currently headlining select concert dates across the nation and working on his full-length album debut for BBR Music Group.
Check out the flirtatious “See You Try” lyric video here.
Purchase/stream “See You Try” here.
About Craig Campbell:
Country singer-songwriter Craig Campbell’s neo-traditional sensibility and undeniable talent have made him a favorite of both fans and critics alike for nearly a decade. Since launching out of the legendary Nashville honky-tonk, The Stage, and into the Top 15 of Billboard’s Hot Country Songs chart with 2010’s heartfelt “Family Man,” Campbell has released two acclaimed studio albums and gathered over 1 billion radio airplay audience impressions. Singles like “Fish” have shown off the Lyons, Georgia, native’s down-home side, while the infectious romance of “Keep Them Kisses Comin’” rose into Country radio’s Top 10. A regular performer on the Grand Ole Opry and widely-praised entertainer, Campbell has been lauded by critical outlets like Rolling Stone Country and tastemakers like Country radio DJ Bobby Bones – who says “Seeing Craig perform live will change your perspective on what a well-rounded artist is.” He has been featured on NBC’s TODAY and Macy’s 4th of July Fireworks Spectacular, and is a frequent supporter of both the USO and Fight CRC, where he serves as a national spokesperson in the campaign against colorectal cancer. Last June, Campbell hosted the 5th Annual Craig Campbell Celebrity Cornhole Challenge, and has raised over $200,000 for the Fight CRC organization to date. Following the release of his latest hit, the uplifting 2016 ballad “Outskirts of Heaven,” Campbell has revealed a flirtatious new single – “See You Try” – and is working on his first studio album for BBR Music Group. He recently wrapped up Luke Bryan’s HUNTIN’, FISHIN’ AND LOVIN’ EVERY DAY Tour, and is currently headlining select dates nationwide.
For more information on Craig Campbell and additional tour dates, visit www.craigcampbell.tv.
About Fight CRC:
Fight CRC is a national nonprofit advocacy organization fighting for a cure. It was founded in 2005 by Nancy Roach, a nationally recognized patient advocate who witnessed the need for colorectal cancer advocacy after her mother-in-law’s diagnosis. The organization plays an important role in rallying colorectal cancer advocates to action. Fight CRC is known for activism and patient empowerment throughout patient, academic, political, scientific, medical and nonprofit communities. With a mission focused on advocacy, research, patient education and awareness, the organization serves advocates in every state of the U.S. and many others around the world. Fight CRC is a 4-star charity by Charity Navigator and 93 cents of every dollar donated goes directly to colorectal cancer programs. To learn more, visit FightCRC.org.
mailtofacebooktwitter