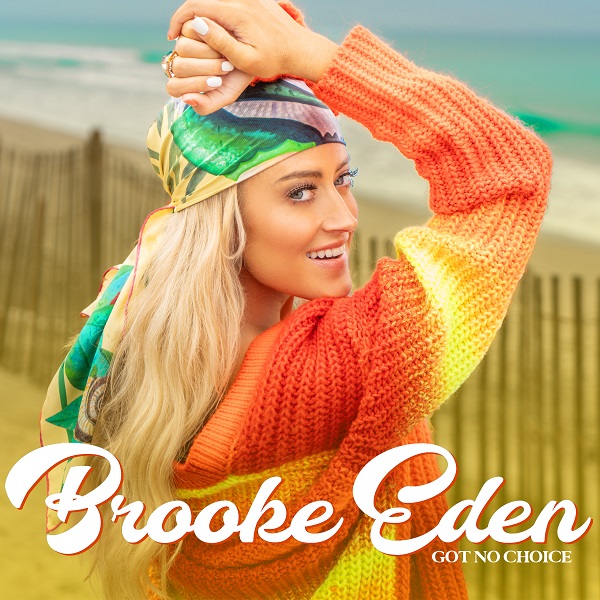 To be released this Friday, May 7th, Country singer-songwriter Brooke Eden releases her warm and inviting track “Got No Choice,” penned by herself, Jesse Frasure, and Cary Barlowe. As the third and final track to Eden’s reintroduction, she proves that she’s “Got No Choice” but to love honestly. The song is available to pre-add/pre-save HERE now. The accompanying video is to premiere the next day, May 8th, on CMT’s “Hot 20 Countdown” as well as on ViacomCBS’ Times Square billboard.

“I fell in love with someone when I least expected it and had to learn to follow my heart and not listen to what anyone else had to say,” states Eden. “I wrote this song about not being able to choose who you love, even if it doesn’t ‘fit on paper.’ This is an anthem for anyone who has had to stand up for their love or just wants to shout it from the rooftops!”

Eden meant for this track and accompanying video to show the happiness that comes with living and loving with integrity. Eden shares “No Shade,” “Sunroof,” and now “Got No Choice,” as a trilogy of sorts. Marking the end of her four-year hiatus, these songs are the manifestation of having taken the time to become confident in who she is and who she loves. Collaborating with director Ford Fairchild to create each video, Eden was able to incorporate her girlfriend, her hometown, and even the bar at which she grew up singing, into the music videos that so authentically give the viewer a glimpse into Eden’s world.

The songs and videos thus far have received with much critical acclaim:

“Eden hopes her latest series of songs will inspire people looking for silver linings in their struggles.” – Washington Post

“The breezy video, featuring Eden with her real-life girlfriend, feels as liberating, warm and lovely as the song itself.” – Billboard (on “Sunroof”)

Displaying her signature vocal swagger, Eden’s trilogy of songs allows listeners to follow each step in her journey from her 2017 breakout single, “Act Like You Don’t,” to her current outlook. The first song and video released in the trilogy, “No Shade,” kicked off the intertwined narrative. The wildly infectious melody and throw-back flare of her second track, “Sunroof,” co-written by Eden, Sarah Buxton and Jesse Frasure, draws as much from the Supremes as it does from Nashville’s current country stylings. The resulting sound reflects Eden’s newfound levity, and perfectly combines the artist’s soulful and country influences into a fresh new direction. “Sunroof” was the first song created with Eden’s refreshed sound in mind. Led by Jesse Frasure (Thomas Rhett, Florida Georgia Line, Kane Brown, Marshmello, Meghan Trainor, and more), the three buoyant new tracks were produced by him. The accompanying video has not only amassed over seven million streams, but also hit #1 on iTunes 48 hours after it’s premiere, beating out Silk Sonic (Bruno Mars and Anderson Paak) for the #1 all genre position.

Hear more about Eden’s personal and professional growth since her 2016 release of Welcome to the Weekend HERE.

Brooke is also holding a contest in partnership with Mas Agave Premium Seltzer. Fans that pre-save / pre-add “Got No Choice” will be entered for a chance to win a Prize Pack from Mas Agave Premium Seltzer, which is the same drink featured in the “No Shade” Music video. 3 grand prize winners will be chosen and the contest will run from May 3rd through May 7th, for more information visit HERE.