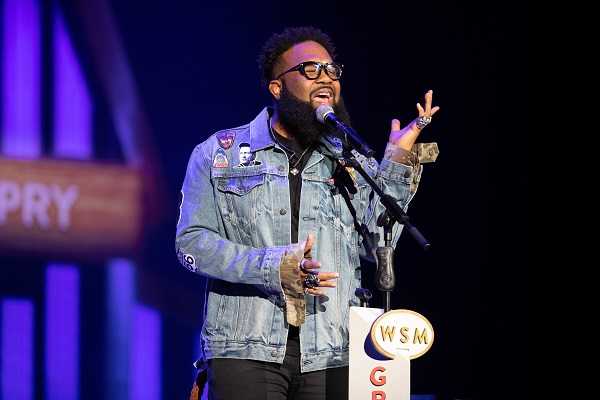 Blanco Brown, the mastermind behind the international smash single “The Git Up,” made history Tuesday night as he became the first artist to perform at the Grand Ole Opry accompanied by a DJ—which was a key element to showcasing the musical influence 808’s have in his signature “TrailerTrap” sound. Stepping onstage wearing spurs at the historical Ryman Auditorium, Brown fulfilled a lifelong dream of performing for the world-famous Grand Ole Opry stage.

After receiving a standing ovation, Brown met with Charley Pride and asked the Grand Ole Opry member to sign his jacket, to commemorate his first time experiencing the magic of the Opry. Blanco performed “Temporary Insanity,” “Tn Whiskey” and the hit “The Git Up,” off his new album, Honeysuckle & Lightning Bugs. He kept the celebration going with an Opry Debut After Party at Ole Red where he performed and signed albums for fans.

“What an incredible moment, I can’t believe it was the first time since the Opry started in 1925 that an artist has performed using 808’s,” said Brown. “I make music to spread joy and seeing the Ryman Auditorium filled with people smiling and dancing with me was something I’ll never forget. I want to thank the Grand Ole Opry for opening their hearts to me and allowing me to share my purpose with their audience.”

Brown released his debut album, Honeysuckle & Lightning Bugs on October 11 via BBR Music Group. Inspired by his youth growing up in Atlanta during the school year and rural Georgia during the summers, the album title is a tribute to his split-location upbringing that taught him the value of diversity and uniting people, things and sounds, which ultimately lead to the creation of TrailerTrap, a new genre that fuses hip hop beats with 808’s and traditional Country music. Brown grew up listening to Country icons like Johnny Cash but truly fell in love with Country music after hearing Tim McGraw’s “Don’t Take the Girl.” Recently, while in Australia, McGraw arranged a surprise meeting with the newcomer and the two joined together to sing McGraw’s heartbreaker.

Despite being a newcomer to the stage, Blanco has already performed at halftime during Thursday Night Football, the match-up between University of Georgia and Florida, the SESAC Awards, the US Open and the Teen Choice Awards—he will take to the road at the top of the year with Chris Lane on the BIG, BIG PLANS Tour. Showing no signs of slowing down, “TrailerTrap” creator recently presented on the CMA Awards and is set to make several additional national tv appearances in the coming weeks.

In support of the album which Rolling Stone says “flexes those storyteller muscles,” Blanco traveled from coast-to-coast with appearances in New York City, Georgia, Nashville and Los Angeles. The “TrailerTrap” creator performed a mashup of a brand-new song off the new album, “FunkyTonk,” along with his global hit “The Git Up” on Good Morning America, Jimmy Kimmel Live! (and a bonus performance of “Tn Whiskey”), and The Talk (begin around minute 32).The multi-talent also attended the Little Kids Rock Benefit with Usher and Wiz Khalifa as well as the iHeartRadio ICONS with Elton John, was selected as Facebook’s Artist of the Day, released a music video for his Country ballad, “Tn Whiskey” (which premiered exclusively on Taste of Country), and sat down with superstar Ciara for an ET Live Artist X Artist.

The world got its first taste of Blanco’s work as an artist with the global smash, “The Git Up,” which claimed the #1 spot on Billboard’s Hot Country Songs Chart, for 12 weeks (the longest reign since the chart’s creation). The track went viral after a social video of Blanco performing the dance caught the world’s attention and spawned nearly three billion views and millions of user-generated videos using #TheGitUpChallenge.

His debut album, Honeysuckle & Lightning Bugs, is a full-fledged collection of music, jam packed with intricate details, that delves deep into the “TrailerTrap” genre he created. Having wrote/co-wrote and produced every track, in addition to playing many of the instruments, the album takes listeners on an odyssey filled with life lessons, emotional passages and anecdotes from Brown’s life.